The Theogony (Greek: Θεογονία, Theogonía, Attic Greek: [tʰeoɡoníaː], i.e. “the genealogy or birth of the gods”) is a poem by Hesiod (8th – 7th century BC) describing the origins and genealogies of the Greek gods, composed c. 700 BC. It is written in the Epic dialect of Ancient Greek. 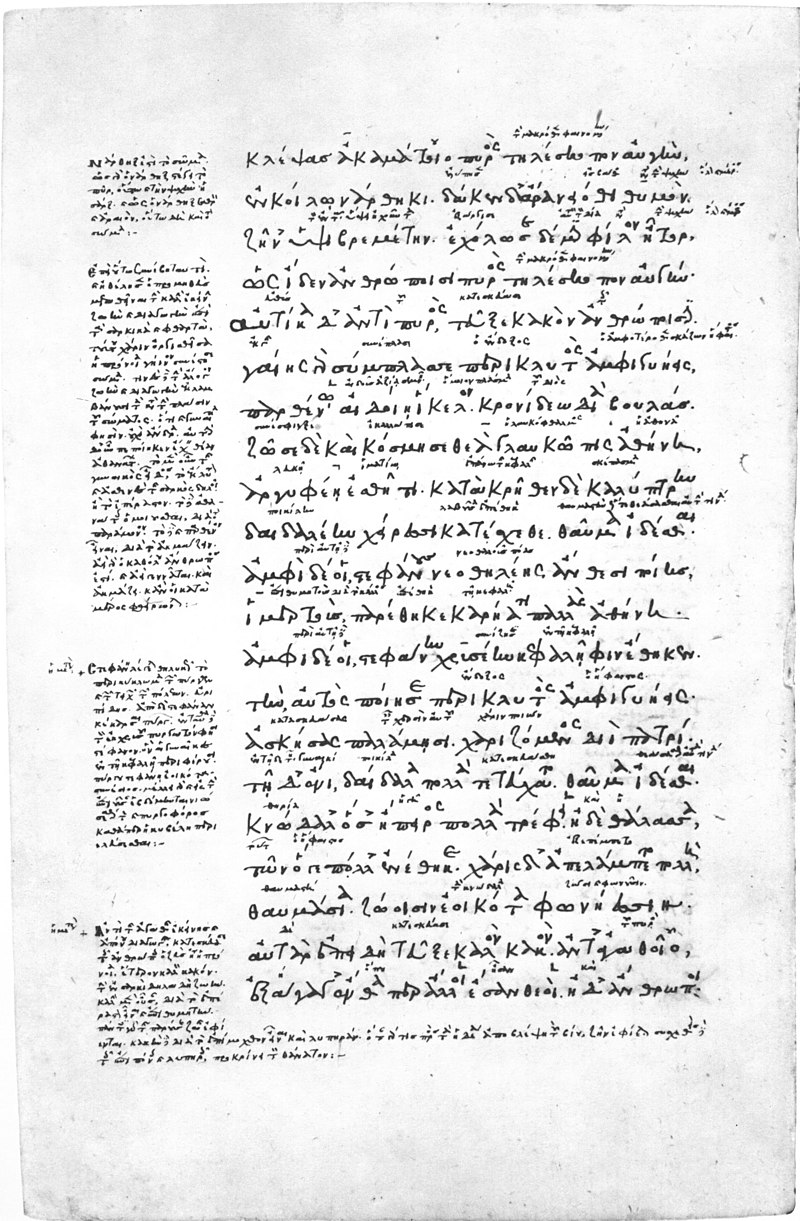 Again, Phoebe came to the desired embrace of Coeus.

Then the goddess through the love of the god conceived and brought forth dark-gowned Leto, always mild, kind to men and to the deathless gods, mild from the beginning, gentlest in all Olympus. Also she bare Asteria of happy name, whom Perses once led to his great house to be called his dear wife. And she conceived and bare Hecate whom Zeus the son of Cronos honoured above all. He gave her splendid gifts, to have a share of the earth and the unfruitful sea. She received honour also in starry heaven, and is honoured exceedingly by the deathless gods. For to this day, whenever any one of men on earth offers rich sacrifices and prays for favour according to custom, he calls upon Hecate. Great honour comes full easily to him whose prayers the goddess receives favourably, and she bestows wealth upon him; for the power surely is with her. For as many as were born of Earth and Ocean amongst all these she has her due portion. The son of Cronos did her no wrong nor took anything away of all that was her portion among the former Titan gods: but she holds, as the division was at the first from the beginning, privilege both in earth, and in heaven, and in sea. Also, because she is an only child, the goddess receives not less honour, but much more still, for Zeus honours her. Whom she will she greatly aids and advances: she sits by worshipful kings in judgement, and in the assembly whom she will is distinguished among the people. And when men arm themselves for the battle that destroys men, then the goddess is at hand to give victory and grant glory readily to whom she will. Good is she also when men contend at the games, for there too the goddess is with them and profits them: and he who by might and strength gets the victory wins the rich prize easily with joy, and brings glory to his parents. And she is good to stand by horsemen, whom she will: and to those whose business is in the grey discomfortable sea, and who pray to Hecate and the loud-crashing Earth-Shaker, easily the glorious goddess gives great catch, and easily she takes it away as soon as seen, if so she will. She is good in the byre with Hermes to increase the stock. The droves of kine and wide herds of goats and flocks of fleecy sheep, if she will, she increases from a few, or makes many to be less. So, then. albeit her mother’s only child (17), she is honoured amongst all the deathless gods. And the son of Cronos made her a nurse of the young who after that day saw with their eyes the light of all-seeing Dawn. So from the beginning she is a nurse of the young, and these are her honours.

(17) Van Lennep explains that Hecate, having no brothers to support her claim, might have been slighted.

*Coeus and Phoebe married to produce Leto and Asteria (mother, with her cousin Perses of Hecate, the goddess of wilderness, childbirth, witchcraft and magic)

Family Tree of the Theogony of Hesiod

“And she, becoming pregnant, brought forth Hekatē, whom Zeus, the son of Kronos, honored beyond all and provided for her splendid gifts, to wit, to hold a share of earth and of barren sea. But she has obtained honor also from starry Sky, 415 and has been honored chiefly by immortal gods. For even now when anywhere some one of men upon-the-earth duly propitiates them by doing worthy sacrifice, he calls on Hekatē; and abundant honor very speedily attends him, whose vows the goddess shall receive, that is to say, graciously, 420 and to him she presents wealth, for she has the power. For as many as were born of Earth and Sky, and received a share of honor, of all these she has the lot, neither did the son of Kronos force any portion from her, nor did he take away as many honors as she has obtained by lot among the elder gods, the Titans, 425 but she has them, as at the first the distribution was from the beginning. Nor, because she is sole-begotten, has the goddess obtained less of honor, and her prerogative on earth, and in the sky, and sea, but even still much more, seeing that Zeus honors her. And to whom she wills, she is greatly present, and benefits him, 430and he is distinguished, whom she wants that way, in the assembly among the people; and when men arm for mortal-destroying war, then the goddess draws nigh to whom she will, kindly to proffer victory and to extend renown to them: and in judgment she sits beside august kings: 435 and propitiously again, when men contend in the games, there the goddess stands near these also, and helps them. And when he has conquered by strength and might, a man carries with ease a noble prize, and rejoicingly presents glory to his parents. Propitious is she also to be present with horsemen, whenever she wishes; 440 and to them who ply the rough silvery main; and they pray to Hekatē and the loud-sounding Earth-shaker. Easily too the glorious goddess presents an ample spoil, and easily is she accustomed to withdraw it when it is shown, that is, if she is so disposed in her mind. And propitious along with Hermes to increase the flock in the folds, 445 the herds of cattle, and the droves, and broad herds of goats, and flocks of fleecy sheep, if she chooses in her heart, she makes great from small, and is accustomed to make less from being many. Thus, in truth, though being sole-begotten from her mother, she has been honored with rewards amidst all the immortals. 450 And the son of Kronos made her the nursing-mother-of-children, who after her have beheld with their eyes the light of far-seeing Dawn. Thus is she from the beginning nursing-mother, and such are her honors.”

…Asterie conceived and bore Hekate, whom above all  :411
(6) Kronides = son of Kronos = Zeus (11) Zeus Kronides (6)
honored. He granted her glorious gifts and
to have a portion of the Gaia and unplowed sea.
She has a portion also of the starry Ournaos as her province.
She is especially honored among the immortals gods. :415
For even now, when some one of men on earth,
sacrificing beautiful victims, propitiates the gods
in the customary way, he calls upon Hekate. Much honor
follows him easily whose prayers the goddess eagerly
accepts. She gives him blessings, since it is in her power. :420
She has a share with all the immortals
who were born from Gaia and Ouranos and received honor.
Kronides never did her violence or took from her
what she had from the distribution among the former Titans,
but she retained all as the distribution was first done. :425
Although only-begotten, the goddess did not receive
a lesser share of honor and privileges in the earth and
Ouranos and sea, but yet even more, since Zeus honors her.
She comes and greatly aids whatever man she prefers
and at trials sits beside revered kings. :430
In the marketplace, that man whom she prefers is preeminent
among people. Whenever men arm for man-slaying
war, then the goddess comes beside those whom
she prefers, eagerly granting victory and holding out glory.
Good is she at standing beside horsemen she prefers. :435
Good again is she when men compete in the contest.
There the goddess comes beside and aids them.
He who has won by brute force and power carries
the beautiful prize off lightly and joyfully and confers honor
upon his parents. Upon those who work the rough grey sea and :440
pray to Hekate and loud-rumbling Earth Shaker,
easily does the glorious goddess confer a larger catch.
Lightly, too, if it is her wish, she takes away one appearing
before them. Noble is she in the stables with Hermes to
increase the herds. Herds of cattle, broad flocks of goats and :445
wooly sheep, if it is her wish in her spirit,
she enlarges from small and diminishes from many.
Thus, even being the only begotten of her mother,
she is honored with privileges among all the immortals.
Kronides made her Nurturer of Youths who after her :450
with their eyes saw the light of much-seeing Dawn. Thus from
the beginning she was Nurturer of Youths, and these are her provinces.